Angkor Wat combines two basic plans of Khmer temple architecture: the temple mountain and the later galleried temple, based on early South Indian Hindu architecture, with key features such as the Jagati. It is designed to represent Mount Meru, home of the devas in Hindu mythology: within a moat and an outer wall 3.6 kilometres (2.2 mi) long are three rectangular galleries, each raised above the next.

Angkor Wat is the largest Hindu temple complex in the world, situated at Angkor, Cambodia, built by King Suryavarman II in the early 12th century as his state temple and capital city. As the best-preserved temple at the site, it is the only one to have remained a significant religious centre since its foundation – first Hindu, dedicated to the god Vishnu, then Buddhist. The temple is at the top of the high classical style of Khmer architecture. It has become a symbol of Cambodia, appearing on its national flag, and it is the country's prime attraction for visitors.

Angkor Wat combines two basic plans of Khmer temple architecture: the temple mountain and the later galleried temple, based on early South Indian Hindu architecture, with key features such as the Jagati. It is designed to represent Mount Meru, home of the devas in Hindu mythology: within a moat and an outer wall 3.6 kilometres (2.2 mi) long are three rectangular galleries, each raised above the next. At the centre of the temple stands a quincunx of towers. Unlike most Angkorian temples, Angkor Wat is oriented to the west; scholars are divided as to the significance of this. The temple is admired for the grandeur and harmony of the architecture, its extensive bas-reliefs, and for the numerous devatas adorning its walls.

The modern name, Angkor Wat, means "City Temple"; Angkor is a vernacular form of the word nokor, which comes from the Sanskrit word nagar. Wat is the Khmer form of the Pali word "vatthu", meaning "temple grounds". Prior to this time the temple was known as Preah Pisnulok (Vara Vishnuloka in Sanskrit), after the posthumous title of its founder.

Angkor Wat lies 5.5 kilometres (3.4 mi) north of the modern town of Siem Reap, and a short distance south and slightly east of the previous capital, which was centred at Baphuon. It is in an area of Cambodia where there is an important group of ancient structures. It is the southernmost of Angkor's main sites.

The initial design and construction of the temple took place in the first half of the 12th century, during the reign of Suryavarman II (ruled 1113 – c. 1150). Dedicated to Vishnu, it was built as the king's state temple and capital city. As neither the foundation stela nor any contemporary inscriptions referring to the temple have been found, its original name is unknown, but it may have been known as Vrah Vishnu-lok ( literally "Holy Vishnu'-Location'", Old Khmer' Cl. Sanskrit). after the presiding deity. Work seems to have ended shortly after the king's death, leaving some of the bas-relief decoration unfinished. In 1177, approximately 27 years after the death of Suryavarman II, Angkor was sacked by the Chams, the traditional enemies of the Khmer. Thereafter the empire was restored by a new king, Jayavarman VII, who established a new capital and state temple (Angkor Thom and the Bayon respectively) a few kilometres to the north.

In the late 13th century, Angkor Wat gradually moved from Hindu to Theravada Buddhist use, which continues to the present day. Angkor Wat is unusual among the Angkor temples in that although it was somewhat neglected after the 16th century it was never completely abandoned, its preservation being due in part to the fact that its moat also provided some protection from encroachment by the jungle.

Bayon Temple, The Bayon is a well-known and richly decorated Khmer temple at Angkor in Cambodia. Built in the late 12th or early 13th century ... 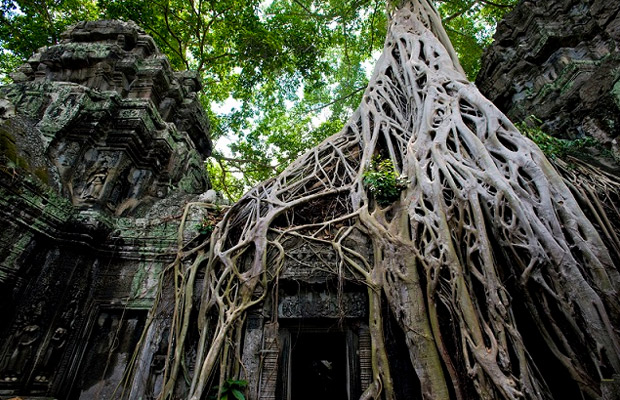 Ta Prohm Temple, Ta Prohm is the modern name of the temple at Angkor, Siem Reap Province, Cambodia, built in the Bayon style largely in the ...