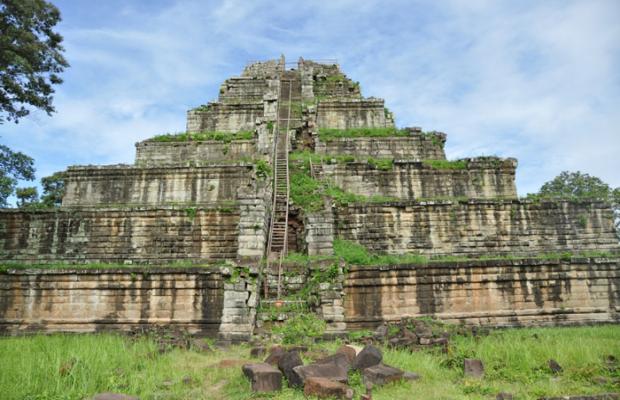 Koh Ker is a remote archaeological site in northern Cambodia about 120 kilometers (75 mi) away from Siem Reap and the ancient site of Angkor. It is a very jungle filled region that is sparsely populated. More than 180 sanctuaries were found in a protected area of 81 square kilometers. Only about two dozen monuments can be visited by tourists because most of the sanctuaries are hidden in the forest and the whole area is not fully demined. Koh Ker is the modern name for an important city of the Khmer empire. In inscriptions the town is mentioned as Lingapura (city of lingams) or Chok Gargyar (sometimes translated as city of glance sometimes as iron tree forest). Under the reign of the kings Jayavarman IV and Harshavarman II Koh Ker was briefly the capital of the whole empire (928–944 AD). Jayavarman IV forced an ambitious building program. An enormous water-tank and about forty temples were constructed under his rule. The most significant temple‑complex, a double sanctuary (Prasat Thom/Prang), follows a linear plan and not a concentric one like most of the temples of the Khmer kings. Unparalleled is the seven‑tiered and 36-metre (118 ft.) high pyramid, which most probably served as state temple of Jayavarman IV. Really impressive too are the shrines with the two‑meter 6 ft 7 in high linga. Under Jayavarman IV the style of Koh Ker was developed and the art of sculpture reached a pinnacle. A great variety of wonderful statues were chiselled. Because of its remoteness the site of Koh Ker was plundered many times by looters. Sculptures of Koh Ker can be found not only in different museums but also in private collections. Masterpieces of Koh Ker are offered occasionally at auctions. These pieces in present times are considered stolen art. The site is about two and half hours away from Siem Reap basic visitors' facilities are now being built. This makes Koh Ker very attractive for anyone who would like to experience lonely temples partly overgrown by the forest. Since 1992 the site of Koh Ker is on the UNESCO tentative world heritage list.